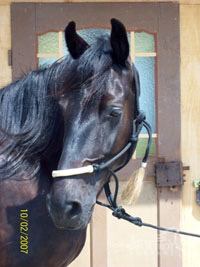 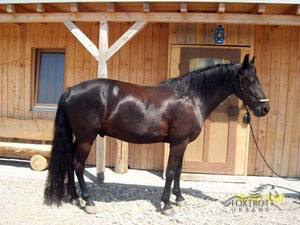 This Missouri Fox Trotter is 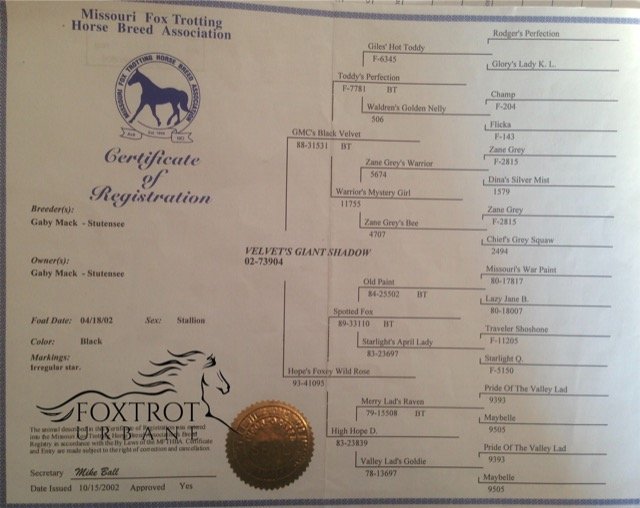 „Velvet´s  Giant Shadow“, born in 2002 at the „Clay Pit Stables“ in Altusried, Germany.

He has been trained by me with the support of experienced trainers and is able to perform all the typical foxtrotter gaits.

Since 2005, we are we regularly competing in western and foxtrotter events all over Germany.

We have been successful in Model and Gait classes as well as in Horsemanship and Obstacle trail. His special talent is the Trail. We have a lot of fun with the Gaited Working Equitation (GWE) and long outdoor trail rides.

In 2018 he was one of three Missouri Foxtrotters at the big gaited horse demonstration „Gala der Gangpferde” in Bern, Switzerland. I was very proud of him, when I rode him through the city of Bern with a lot of cars, buses, tramways and traffic lights without any difficulties.

Occasionally we help our neighbor to bring his cattle to a new pasture. In Germany cattle are kept on small fields. To move cattle between fields, the covered distance is small, but busy roads must be crossed, which is quite the opposite to the usual procedure in the US. Shadow never got in trouble neither with the cows, nor with the vehicles on the road.

Because Shadow has strong nerves, he was an actor on our famous big open-air theater in Altusried with thousands of spectators. He played a central role in the exciting cavalry fighting of Napoleon Bonaparte in the historic spectacle „Andreas Hofer“. In this show he had to perform some more tasks which none of the other horse could do. This included carrying drums, catching fleeing fighters and staying alone on the stage while all other horses gallop away!

All in all, I would say that Shadow is a very versatile and trusting horse with a gentle nature.

I´m very glad to be a part of the fox trotter urbane community. Would never be without a fox trotter.

Need help or have questions with your Missouri Fox Trotter or Foxtrot Urbane?  We would love to help, we're just a click away!