The Little Trailer That Still Does With the Missouri Fox Trotters 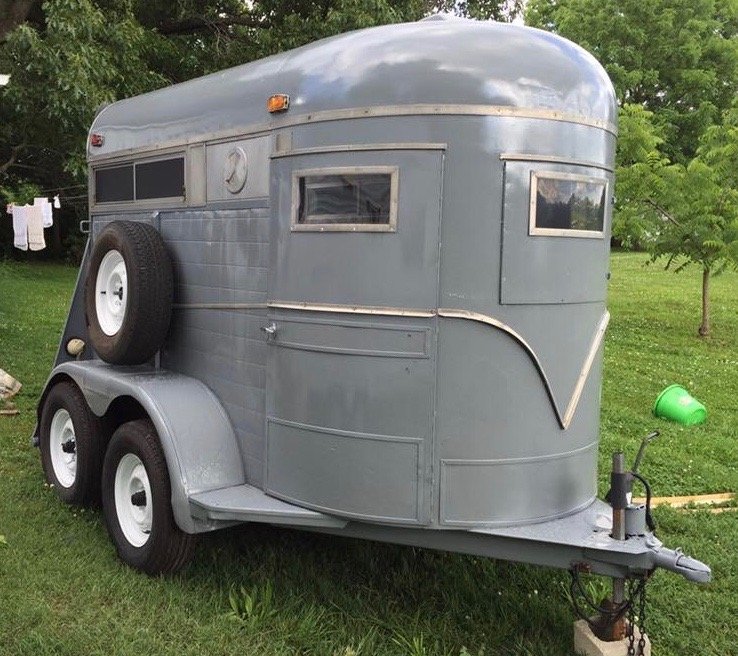 This trailer has carried a lot of Missouri Fox Trotters around and still does.  Do you remember the year 1975? I have to admit that I wasn’t even thought about in 1975, but it was the year that our little horse trailer was built. Now to some she may not look like much, but to us, she represents a lot.

Here’s a little back story on her. My dad, Danny Cantrell, bought her off of Lonnie Cunningham in 1993. He shared with me that he paid $700 for the little trailer and it was in good shape for its age. Once dad got a hold of it he took it to various barns every night of the week and to a horse show on every weekend. I can remember that our family of four would all pile into the truck and away we would go. The truck was a standard with one bench seat. I’d like to see our family try and fit now! Ha!

Anyway, we went everywhere and the little grey trailer followed along behind hauling our Missouri Fox Trotters. We pulled it from 1993 until it’s first retirement in 2003. We had upgraded to a four horse slant load and we were right up town. The little trailer slowly became forgotten about and the weeds grew up around her. Seasons came and went and she sat. The longer she sat the more of an eye sore she became. I think my mom posted the trailer for sale and nobody even wanted her then. 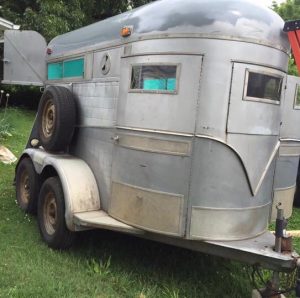 Fast forward to 2015. My husband and I had been married for one year and had just moved to an old farm that had 6 acres. That meant we could now have our Fox Trotters at our house!! We were beyond thrilled, but how to get the horses to the house? Or how would we take them to the vet, or show, or anything without a trailer? Well, I knew just where to find one! So, I called dad! “Dad, if we fix the trailer up can we use it?!” He probably thought we were crazy, but knew that we were serious. We pulled it from the weeds into the barn. From there we looked it over really good to see what needed fixing. The floor was in rough shape along with the back support bar. We took up the floor and dad cut out the back bar. Now I’m sure that part has some fancy name, but I have no clue. Anyway, we cut, replaced and repaired everything that needed fixing. It was then sound and able to carry a horse. But…. she was still a little rough looking.

My husband loves to make old things look new and this trailer came to the right home. I also have to tell you that he can stretch a dollar a million miles, so this trailer would be no exception. We got some marine paint and some paint rollers and we worked. A few hours and some paint later she all but looked brand new! We pulled it to her first horse show in years and she looked better than ever! I do have to admit, she stilled smelled like new paint when we pulled in 😉 We were as proud as punch! Not only did we have a horse trailer, but it looked good and pulled easy! We can hook it up quickly and easily and it’s small enough we can make a U turn in the road if we have to!

I’ll include a before and after picture so you can see what she came from to where she is now. Who would have thought after all these years she would still be going up and down the road just as much as she ever did! If we take good care of her she might just be our daughters first trailer. I’m sure some might laugh at us when we pull up, but that little trailer represents so much to us. We can come and go with our Fox Trotter horses and we don’t have to depend on anyone to go anywhere. That little trailer was traveled thousands of miles and with the 10 ply tires we have on it, it should go many more. We can’t thank mom and dad enough for letting us be a small part of this trailers story. Here’s to many more years and stories about our little grey trailer.