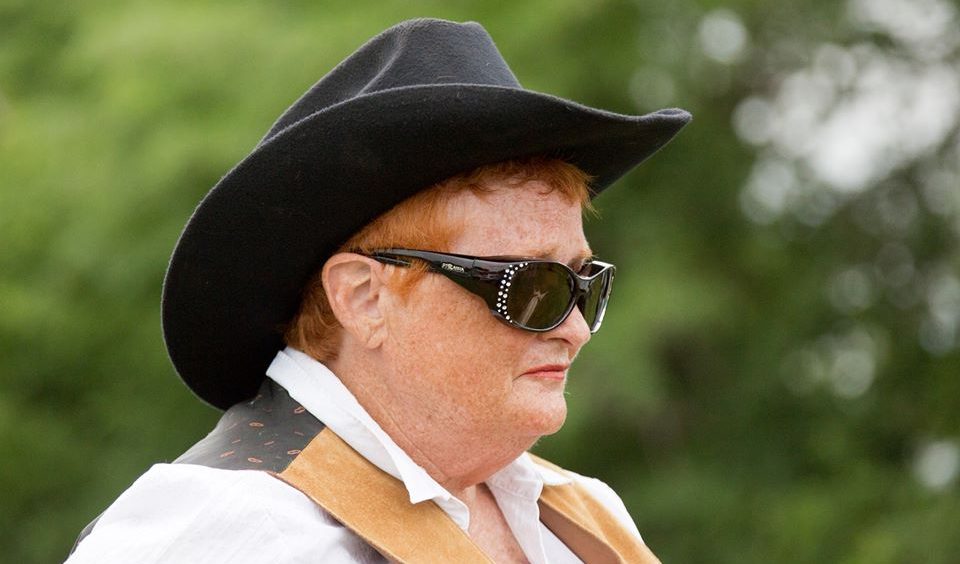 Backing my Missouri Fox Trotter horse up should be easy, but there is a back story to this named Fancy.  My wonderful friend loaned me a horse so I could ride while my own horse was recovering from stifle, later diagnosed as EPM. She came with past problems, but she was rideable. I needed a horse to ride. Winter depression sets in when you are a crazy horse woman without a rideable horse. Plus there is the sadness seeing your beloved horse with a limp.

Fancy came into my life. I got her and took her home. A few days later I took her over to Patterson Performance Stable to ride! I was anxious. Am I really going to ride? Heck yes. She has been trained to ride. There is no buck in her. There is no bolt in her.

Out of the trailer, walking into the arena. Life is good. Erin was riding in the arena and a witness to the following story. I suggested that Erin might ride Fancy before I did. “We’ll see” was her famous words.

We stepped into the arena. I started to lead her around the arena. This Missouri Fox Trotter invaded my personal space. She tried to walk on top of me. Oh no, that is not acceptable to me. I turned around and shook the rope. I shook the rope with a lot of vigor. The rope was ignored. She did not take one single flinch, much less a step, backwards. She was on top of me. I swung the rope so that the clasp would bang her nose. Oh my!

She squealed, lifted her tail, spurted and struck my leg with her hoof. It was such a light kick, that I felt it, but it didn’t hurt. Fancy kicked me. She was also in heat. We went to war. If I had known that war was going to happen, I would have charged admission. When I got Fancy out of my personal space a few times, we went home. Erin did not try to prevent me from leaving because of her anxiety to ride such a firebrand!

We started playing the Parelli seven games (which includes backing) in my new round pen. After 30 or so days and a hind leg kick, I managed to get her to back about six feet away from me.

Fancy is a dominant, left brain extrovert. Backing means giving up the dominant position in our herd of two. Fancy has remained opposed to backing. I can get her to back grudgingly the length of my Horsemanship aides. After my stick and string run out she stops. Her backing steps are grudgingly given.

We have remained in my sad state of backing horsemanship for a year when the Kohout’s Challenge with Foxtrot Urbane was announced. The challenge was to back your horse 20 feet using only your shaking finger for the signal. Ha!

The video of Fancy backing 20 feet at Liberty with my body as the signal is a miracle! Thank you Hope Kohout for dreaming up this challenge to advance my relationship with Fancy. She is not an easy sell!

See all the accomplishments of this beautiful Missouri Fox Trotter She’s Something Fancy O. (Fancy’s)  at https://foxtroturbane.com/shes-something-fancy-o-missouri-fox-trotter/

Check out my books on Amazon!

If you are interested in becoming a member and enrolling your horse in Foxtrot Urbane, we would love to have you.  Join now at https://foxtroturbane.com/enroll-horse/