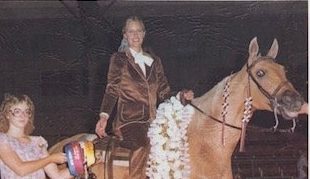 The Mid America Foxtrotting Horse Breed Association made the decision to organize the Two Year Old Futurity in 1970.  It’s main purpose of the Futurity was to promote the Fox Trotting horse.  Colts were nominated when they were yearlings.  The entry fee was $100, which was paid over eight monthly payments.

Training of these colts usually would begin in the winter prior to the show which was held in May, and the entries couldn’t be shown in performance prior to the Futurity.

The original Two Year Old Futurity was held at the Ozark Empire Fairgrounds in Springfield, Missouri.  At that time, there was just one division, the open division, for all the horses to show in.  Each year, the Mid American Foxtrotting Horse Association host a show that includes all ages of horses along with classes for riders young and old.  Pictured are the 1980 Two Year Old Futurity Champion and Reserve Champion.  The Gold Digger, ridden by Billy Johnson, was the Futurity Champion, and Playboys Gallant Red Fox, ridden by Jerry Middleton was the Futurity Reserve Champion. 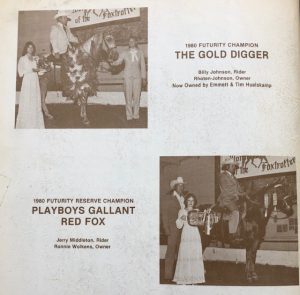 Along with showcasing the Two Year Olds, other classes and ages of horses were also showcased with many of them crowned as Champions. 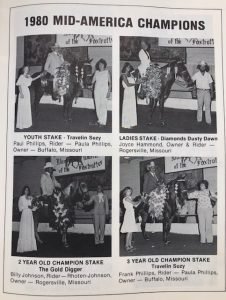 Advertisers usually consisted of local businesses from the Southwest Missouri area, along with Missouri Fox Trotter owners like Kathy Fowler who won 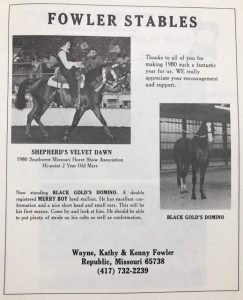 If you have watched Missouri Fox Trotters for any length of time, you will know that the face of Sharon Jolley has been around the winners circle many times, and that was no exception in 1980 on Missouri’s Queen B. 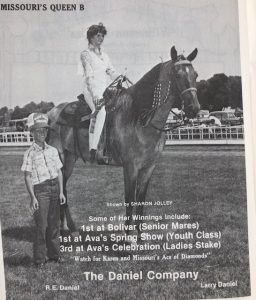 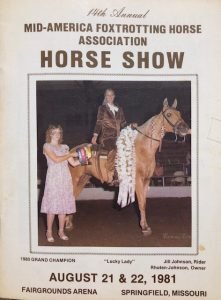